For information on our other favorite beacons, check out our Top 4 Favorite Avalanche Beacons.

As nice as it is to have the most advanced tools in your alpine expedition, they can also be limiting. This is because gear with lots of innovative features have a learning curve. And unless you are a pro, the user-interface is usually not the most friendly either.

If you are in a store checking out gear, these simple factors may seem frivolous. But when you are in the cold, facing an emergency avalanche rescue, these concerns can be of the utmost importance. The extreme cold compounded with the rush of adrenaline can be overpowering. In addition, your gloved fingers can also hamper the usability of your tools.

In such situations, a simple gadget with no fancy technology can be the answer. You don’t have to struggle with the features, and you get the job done efficiently. There are no multiple features to activate or buttons to fiddle with. At most, you press one or two buttons, and you are already on your mission.

If you spend your life in the snow, having an advanced beacon won’t be a hindrance. Because you spend a good part of your time on the slope, exploring and using your equipment, you will be grow to be familiar with them all.

However, if you are just getting into the snow activities, it is a different matter. Avalanche beacons are one of those devices that come with a learning curve. And if it is coupled with advanced features, it can be even more complicated. Some features can even be a challenge for experts. So you can imagine how difficult it can be for an amateur.

So, beacons with advanced features do have their place. However, a snow beacon that is paired down with minimal features cannot be overlooked.

One of these minimalist beacons that recently hit the market comes from Backcountry Access or BCA. The brand needs no introduction in the alpine and backcountry realm. Their tools and gear are incredibly popular among free-riders in the snow.

We are talking about the new BCA Tracker S. According to experts, this beacon is a simplified version of the Tracker3, which is one of the best beacons from the brand. In fact, the S in the beacon’s name stands for Simplicity according to the brand.

While this feature alone was enough to catch our attention, the Tracker S is one of the best avalanche beacons. We reveal all about this beacon in this comprehensive review, so keep on reading.

Don’t miss out on the FAQ section towards the end where we have answered some burning questions as well. 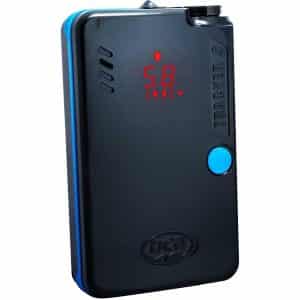 Product Description: The Tracker S comes with three antennas and picks up 457 kHz of frequency. Its LED display is a good size and is also temperature resistant. In addition, the big picture mode scans larger areas at once. Other mentionable features are multiple burial indicator, close proximity indicator, mute mode, and signal suppression modes.

Between the Tracker3 and Tracker S, the most significant difference is their price. The latter is a lot more budget-friendly than its predecessor. Nevertheless, there are other differences as well, so let’s start with the design.

The design of the Tracker S is as simple as they come. It is minimal, with no fancy packaging or outline. It is a simple black device that looks like your average electronic device. The only button you will see in this snow beacon when it is not in use is a large blue button on the right. This is the options button of the snow beacon. The same color also runs throughout the body of the beacon as a border.

Contrary to traditional avalanche beacons, the Tracker S does not have a dedicated screen. A beacon without a screen? How do I read the information and the reading? Well, allow us to explain.

It works through an LED feature, much like a traffic signal. When it is switched on, the red light comes to life, which displays the information. The distance, as well as the directional light and the two nearest persons, can be viewed here. While the absence of a big screen can seem limiting, the light feature comes in very handy during low light situations. The display in the Tracker S is a little bit smaller than with other beacons.

The construction of the Tracker S is solid and very robust. Despite its slimmed-down features, BCA did not compromise with its build quality. In fact, this beacon’s housing is even better than the Tracker3.

The Tracker S does not come with many features that you will find in the Tracker3. However, its performance is not compromised in any way, and BCA deserves applaud.

Among its best features is the multiple burial indicator. This avalanche beacon displays only two people, which we thought was a bummer. But when you start using this feature, you start to realize how efficient it is. In search mode, you can mark the nearest buried person and move on to the next. This feature is facilitated by the Signal Suppression mode or SS that is unique to the Tracker S.

The Signal Suppression works in conjunction with Big Picture or BP mode. They have the best use during a multiple search and rescue. With one touch of the blue button, you can use these features with ease.

As expected from a great device, this beacon comes with triple antennas. It has a digital range of 55 meters, which makes it very effective. However, the range can be affected by a number of environmental condition, so make sure to keep that in mind.

Another performance factor that we truly love about the Tracker S is its speed. Whether it was picking up other transceivers, displaying them, or picking up the signal, it was incredibly quick. The speed of processing didn’t seem to change much whether we were stationary or flying down a slope on skis. So in this regard, this avalanche beacon is a total winner.

On the flip side, Tracker S’s software cannot be updated, which is the biggest drawback. Staying up to date can be a crucial part of your safety gear if you work in the industry or a professional. This is also why we think this avalanche beacon is best suited for recreational use.

Of course, the absence of a motion sensor in this beacon can also be a deal-breaker for some. However, if you are on a budget, you cannot go wrong with the Tracker S.

The user-interface of the Tracker S is one of its best features. It truly justifies the brand’s tag for this beacon, Simplicity. This beacon does not have any complicated features that demand a lot of attention. Its internal setup is not as complex as the beacons used by professionals.

Whatever you need to press to make this beacon work is right there in front of you. The knob at the top takes care of switching between transmitting and receiving. On the other hand, the blue button takes care of the majority of features. So when it comes to ease of use, it cannot get easier than the Tracker S. In this regard, this beacon is one of the best options for beginners.

Despite its ease of use, you should never attempt an alpine or backcountry trip without understanding how a beacon works. It is simply irresponsible behavior. When it concerns your safety and life, every little thing counts.

Another fantastic aspect of this avalanche beacon is battery performance. It has one of the best battery lives of any beacon on the market. Some have argued it is because the features are minimal. But we disagree. Despite its minimal features, a large chunk of the battery consumption comes from the transmitting and receiving of the signal. So the lack of features was a non-issue in relation to battery longevity.

This beacon is powered by 3 AAA batteries. In the transmit mode, it runs up to 250 hours. In the search mode, you could easily get it to run up to 50 hours. If you are wondering where to read or figure out the status of the battery, you will see a small light flashing at the bottom. But of course, we will assume that you will run the diagnostics and do a beacon check every time you switch between receive and transmit modes.

What are the Big Picture Mode and Signal Suppression in the Tracker S beacon?

One of the unique features of BCA avalanche beacons is the Big Picture or BP mode. This is an advanced feature that allows the users to use the beacon to pick up all the signals of nearby avalanche transceivers. In addition, the beacon also displays directional light as well as the distance between the transmitting beacons.

You can determine the best strategy for the rescue and save precious lives with this information. This is a feature in an avalanche beacon that can be indispensable during multiple burial rescue operations.

In the BCA avalanche beacons, pressing the options button and holding it for a few seconds will activate the BP mode.

Signal Suppression or SS mode, in the Tracker S, is also quite unique. When you press the options button and enable SS mode, the beacon will suppress the nearest and the strongest signal for up to a minute. After you mark the transceiver, you can then move on to the next strongest signal the beacon picks up.

It is a feature that is similar to the “mark” option in other avalanche beacons. Correspondingly, it is a very helpful feature while engaging in a multiple avalanche burial rescue.

I have heard that the auto revert in the Tracker S needs to be activated manually. So how do I activate it?

Yes. Unlike in other beacons where auto revert is automatically enabled, you need to do it manually in Tracker S. While this may sound technical, it is quite easy to enable it. We share the steps below:

Regardless of your position and motion, the Tracker S will shift to transmit after five minutes, so you need to keep an eye out. 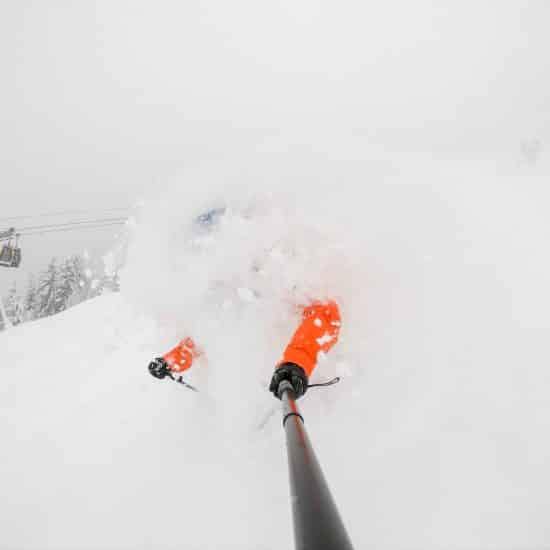 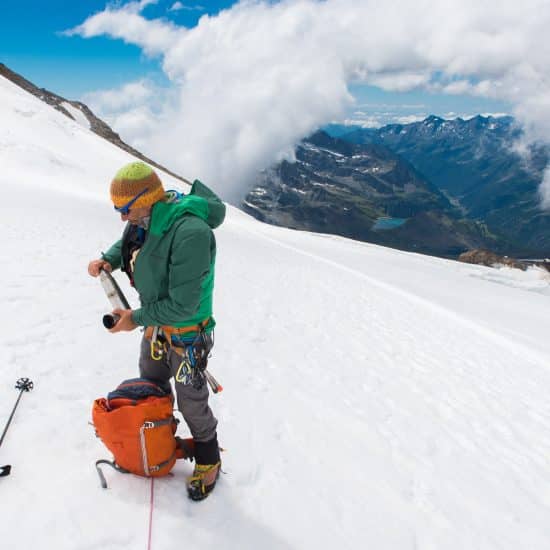 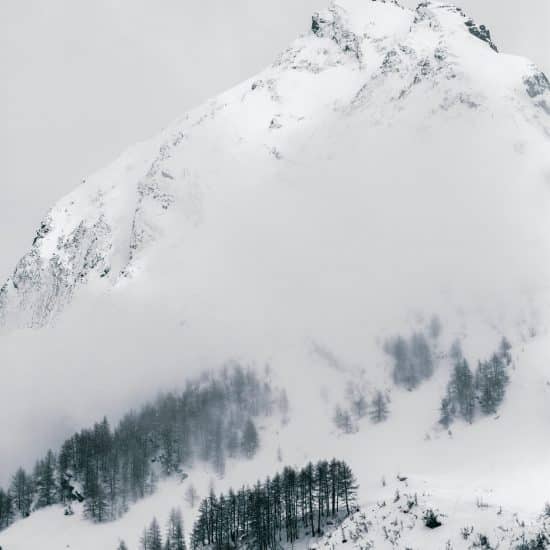 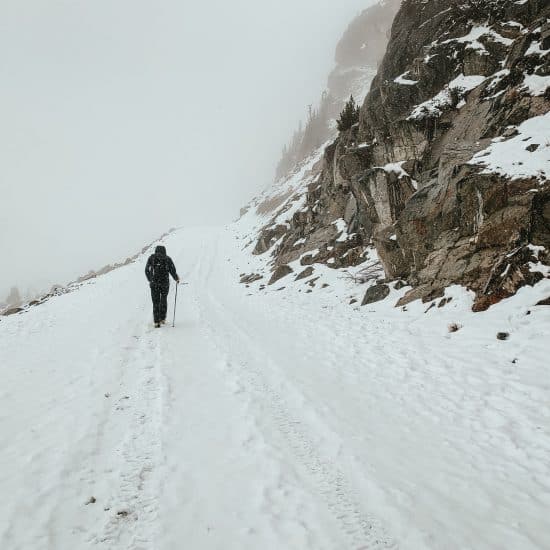